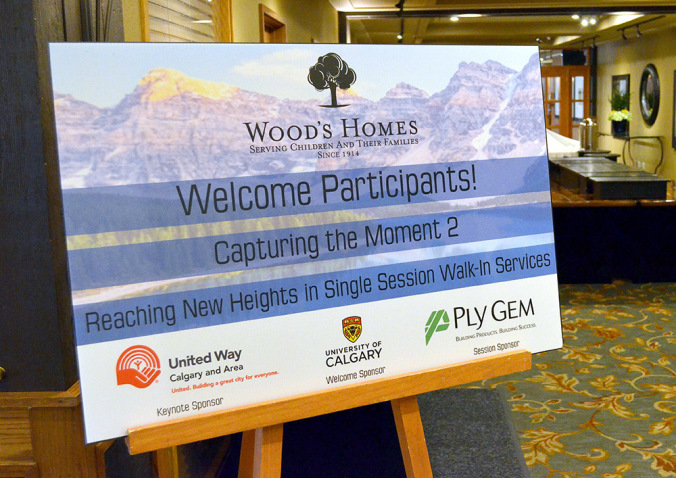 As I sat among dozens of seasoned mental-health practitioners from many different countries, I realized it truly is a small world and there is, in fact, much good in it - despite all the negative rhetoric.

People really do want to help each other – no matter where they come from.  And the proof was here in this small room with the picture-perfect view of the Canadian Rockies displaying an autumn canvas.

This was a worldwide gathering in Banff at the end of September:  Professionals exploring efficiencies in mental health services. Wood’s Homes was proud to host ‘Capturing the Moment 2: Reaching New Heights in Single Session Therapy and Walk-In Services’, The three-day event was based on the success of the initial gathering in Melbourne in 2013 – the first international meeting of clinicians and therapists looking to raise awareness of the success of single session therapy.

Wood’s Homes was the first organization in Canada to provide this service at Eastside Family Centre, currently celebrating its 25th year. It’s been a successful quarter-century that has helped thousands of vulnerable people. There are many reasons to celebrate and share.

As one of about 100 attendees, I found the symposium to be both inspiring and engaging. It was a special event; an international first for Wood’s Homes!

Here are some things I learned.

1. I didn’t need to worry that the presentations were going to be ‘overly clinical’. Although having worked in the mental health arena as a communicator for nine years, there is so much yet to learn. Every speaker was informative and at the same time, entertaining, not only in presentation but in enthusiasm. Each has clearly embraced the power of this type of counselling.

Keynote speakers at Capturing the Moment 2 in Banff September 29, 2015.[/caption]

2. There are 3 big reasons why walk-in counselling is quickly gaining ground around the world:

a) Clients are motivated - they choose the moment. (Research shows motivation fades when appointments are required.) And motivated clients are rewarding to therapists – the ability to strike while the iron’s hot! The world is accustomed to walk-in services – everything from fast food to an oil change so why not counselling?

b) It works! Client satisfaction is high. Most show improvement after the first session. Research shows that the greatest change happens early on in therapy and those gains are upheld over the long term. And if this works so well - the question begs: Why aren’t we doing this more often? No more last-minute client cancellations; hello reduced waiting lists.

3. The calibre and credentials of the speakers proved a great mix; each bringing his or her own perspective on the reasons why single-session therapy and walk-in services is the way of the future. Moshe Talmon, Dr. Michael Hoyt, Dr. Monte Bobele, Dr. Jeff Young, Dr. John Miller, among others.

5. By 2030, the largest contributor to disease will be depression. According to the World Health Organization, nearly a half-billion people in the world suffer from mental illness and it occurs twice as frequent among the poor.

6. Walk-in counselling services tend to work for people who don’t typically embrace traditional therapy services. They don’t want to lie on a couch for hours as the cash register rings. This just might work for the 50% of people who don’t seek the help they need.

7. Former Wood’s Homes CEO Philip Perry and Arnie Slive (clinical psychologist and family therapist) showed great courage going to the community to sell this idea. Eastside Family Centre was launched in Calgary in 1990 thanks to these two gentlemen who braved a skeptical community and never gave up.

8. As Banff Mayor Karen Sorensen brought greetings to the symposium, I realized she is an engaging speaker – filled with wit and charm. She spoke of the mental health challenges in a town comprised mostly of working young people (56% of the population is under 35) who are “away from home for the first time with lots of freedom.” Sorensen says mental health services are as important in her community as they are anywhere else.

9. Non-profit organizations can’t possibly host these important gatherings without the support of the community. Wood’s Homes thanks The United Way, University of Calgary, and Ply-Gem.

10. As a communicator, I recognize the power of this symposium in raising global awareness of the changes in mental health service delivery. Please share this with your community of followers.

Ask for help. Don’t be afraid to reach out to your friends, family and community – let’s work together!