A Voice from the Street: Meet Andy 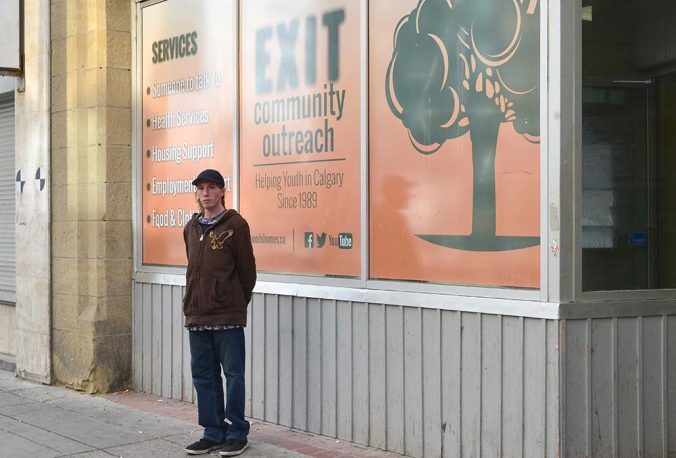 Andy is 26 and has been homeless for seven years.

There’s a story behind every person without a home: After a shower and something to eat, Andy says he’s ready to share his.

We are at EXIT Community Outreach in a back room where it’s quiet. It’s early afternoon and the place is busy; filled with a couple dozen homeless youth. Wood’s Homes counsellors are scurrying about, clients are at the fridge, there’s a lineup for the shower and the washer and dryer add to the noise.

This is the every day at EXIT: A place where young people living on the street, come to take a break. Or in Andy’s case, this is where they come “home for a bit.”

Andy’s story is not unusual, but his willingness to share is, says Patrick Stuhlsatz, a longtime Youth and Family Counsellor.

Andy has come to EXIT for many years and is a favourite among staff. He is articulate, polite, always eager to help and . . . apologetic. He’s careful not to be seen as “abusing the service.  I’m too old really, to be here.”

Born in Ontario, his parents divorced when he was nine. Andy says he and his older brother (now 28) were soon lost in the turmoil. His mother (who was in a long-term facility due to diabetes) died two years ago. His brother is in a mental health centre after trying to commit suicide. Andy is quick to say his father failed his brother, too.  “He never really was a good Dad.  And now . . . it’s kinda too late.” They do not get along with their stepmother.

Andy left home feeling abandoned and angry, joining a friend who was headed west. Soon after arriving in Calgary, he found himself alone, confused and struggling to survive with a Grade 10 education.  Sleeping on the street was easier and free.

Fast-forward a hard few years - Andy admits he’s stuck in the cycle. He is penniless (although suffers no addictions) and sees no way out. When asked what he dreams for the future, his face stiffens and he shrugs: “I just don’t dream anymore.”

Andy is cognizant of his mental health challenges and says without EXIT he’s not sure where he’d be, admitting services like it are desperately needed. He appreciates that staff are good listeners and that they try to understand. “They never say no,” he tells me, almost welling up.

Patrick says EXIT staff has to work to get him to accept food or clothing when he drops by.

So, how does he survive? He busks, does a little couch-surfing and relies on his favourite warm spot inside the Plus 15 at night.

Self-described as a loner, he occasionally calls his father and considers returning to Ontario as an option.

With so many years under his belt living “rough,” Andy says he’s witnessed an increase in the number of young people living on the streets. “Most of them,” he admits, have had serious struggles at home or suffer addictions – “especially to meth.”  They just can’t find a way out. “It’s all about fear.”

“Everyone’s depressed, you know. I just happen to do a damn good job of hiding it.”