A true homecoming to Wood’s Homes 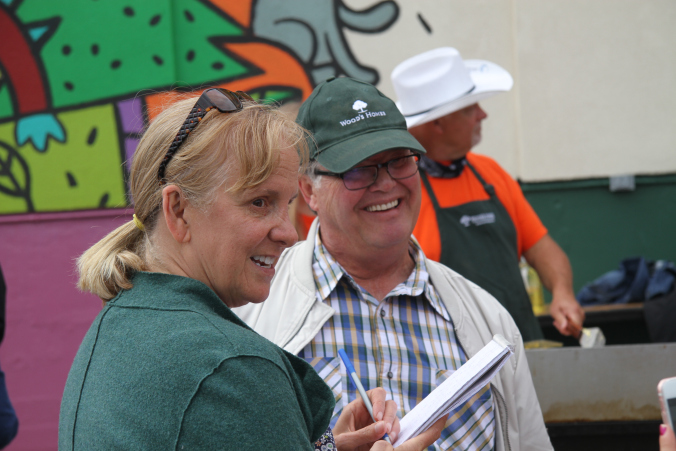 It was 1967 when I came to Wood's Christian Home. I had been running away from home a lot by that time. My stepmother administered severe physical punishment and my Dad was heavy-handed as well. There came a point when I just wanted to leave to get away from it all.  I wasn’t the best kid, but never knew why I was punished so much. I was labeled a troublemaker and subject to harsh discipline almost all the time.

At 11, I was taken to the Calgary Young Offender Centre and soon after was transferred to the Calgary Children's Shelter. I was sent back home for a bit, but before I finished Grade 6, I had run away again. At 12, a foster family took me in, but that didn’t turn out so well either, so, soon after, I was headed to Wood’s in Bowness.

When I reflect back, I didn’t think much about living at Wood’s. I was pretty streetwise by then, but what I did not know is that I was now a ward of the province because I wasn’t wanted back home.

My life at Wood’s began in the Robertson Cottage (where the Phoenix program is now located). The girls had their dormitory and the boys had theirs.

Ms. Lumsden was my Grade 7 teacher at the George Wood Learning Centre – the school on site. A woman of Scottish descent (like George and Annie Wood), she was a loving and caring woman.

At some point, the dorms were removed at the Robertson cottage and single rooms were created. The girls were moved to another cottage and the boys now had their own rooms.  The house matron was a woman named Mrs. Livingston - she was strong, but kind.

I became really familiar with the forest and its great trees, west of our cottage. This was a great place to meet up with friends and be in a unique environment. We built up huge mounds of snow behind the cottages up the hill so we could go tubing and tobogganing.

I fondly remember the lagoon in Bowness Park where we cleared snow and skated in the winter. I loved the camping trips to Big Hill Springs Park and rock climbing at Mount Rundle. I had taken interest in a few things like baking and remember helping to make pancakes for all the kids one time. I also remember wanting to be an architect and designed a floor plan just for Ms. Lumsden (I had a crush on her).

I was no longer being abused. I had learned to be myself and to take responsibility for my actions.

Arrangements were made, a while later, for me to live with my uncle and his family. But again, things didn’t work out and I started to hang out with kids who were stealing cars and such. I landed in the detention centre again.

Eventually I moved back with my father to finish off junior high. I recall seeing a note on my report card that read: "I have no hope for Chris." I left home permanently after that and started the adventure of my life!

On July 4th, 2015 I was at home in Ottawa, and just happened to be watching the Calgary Stampede parade on TV when I spotted the Wood’s Homes float.

I popped onto their website and then made contact. I was told about the tremendous growth of the agency since the time I was there and that Wood’s Homes had celebrated its 100th anniversary in 2014. They sent me their anniversary book and a ball cap, and invited me to attend their 2016 Stampede breakfasts.

It didn’t take me long to decide: I was coming back to Calgary after close to 50 years!

I have family in Calgary, so this would become a true homecoming.

I arrived to the Bowness Stampede Breakfast early on the morning of July 10 and was given a very warm welcome by all, along with a tour of the grounds which although revitalized, haven’t changed too much since I lived there. And I was happy to take some time on my own to reflect on past and present as I wandered those familiar woods and that lagoon.

Hungry folks started lining up so it was time to man the pancake station¨In the end some 100 volunteers and staff served a record crowd of 1,800. I was interviewed by Calgary Herald columnist Valerie Fortney and coincidently spotted my cousin and his wife (who also came from Ottawa) in the crowd.

I was invited to participate at the next breakfast at Wood’s Homes Parkdale campus on July 13 when I was interviewed by CBC Radio. Again, more than 1,700 were served. Here, I met Wood’s Homes CEO Dr. Jane Matheson and Calgary Mayor Naheed Nenshi was there, too. My wife and I felt so welcome and appreciated.

I have come to realize that the services provided by Wood's Homes are as much in need today as they were 100 years ago. Children with no guidance and support will always need help.

Wood's Homes helped me to be a better person, even though the path I led had many twists and turns. Thank you Wood's (Christian) Home for being there for me - I will always remember what you gave me . . . dignity.

And to the clients today: Remember that these people are here for you. They stand by their motto ... We Never Say No, We Never Give Up, We Never Turn Anyone Away. Trust me, it will help you in the future to do the same.

I will always stay in touch.