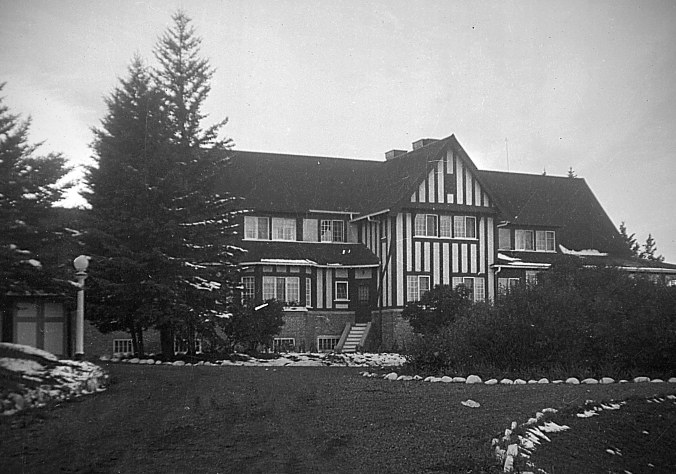 Dozens of alumni visited Wood’s Homes in 2014 to help us celebrate our 100th anniversary. Accompanied by her son Jim, Hilda came early last summer to tour our newly revitalized Bowness campus – Hilda’s home for many years.  Sylvia MacIver, Communications Manager helped tour Hilda and her son, and visited with her on a couple of other occasions. Below are a few of Hilda’s cherished memories that she shared with us.

“Mother Wood loved me, that is for sure. I don’t know why, I couldn’t get over how good she was.”

Hilda McCartney shared this with me the last time I visited with her in the summer of 2014 at the Edgemont Seniors Residence.

Hilda and her siblings grew up at Wood’s Homes shortly after Reverend George Wood and his wife Annie arrived in Bowness (northwest Calgary) with 32 orphans in tow.

Hilda passed away on February 9, 2015. She celebrated her 100th birthday on October 10, 2014 – the same year that Wood’s Homes celebrated its centennial. Hilda was surrounded by family when she passed – only fitting for someone who dedicated her life to her children and family. 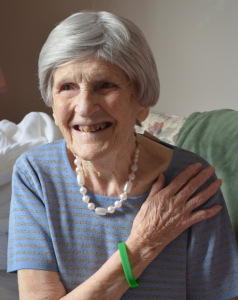 Hilda fondly remembered her years spent at Wood’s Homes, having been sent here by family with two other siblings following the death of her parents.

She was born in Liverpool, England and moved to Calgary at a young age. She spent her teen years at Wood’s Homes and was forever grateful for the love and support she received there.

Mother Wood, sensing Hilda’s intelligence, encouraged her to find office work after graduating. Hilda reiterates, “she was so nice to me.” Hilda recalls once, when she was quite ill, how nurturing and attentive Mother Wood was. She insisted on feeding her chicken soup, despite doctor’s orders!

Hilda explains that once she arrived at Wood’s, “things started going right again” in her life. While in her 20s, she met and married her husband Bert and together they raised two sons to whom she vowed to be a devoted and stay-at-home mom. “How you treat your children makes such a difference,” she said.

Hilda’s funeral service was held early March at Calgary’s First Baptist Church – a building that stood for her faith and commitment. She and Bert were devout and active members.

Hilda will be greatly missed by her family – sons Bob and Jim, sisters May and Madge; several grandchildren and great-grandchildren. She was predeceased by her husband Bert, her sister Mabel, and her brother Harold.

Hilda lived long enough to enjoy a tour of the revitalized Bowness campus – the site where she grew up near the Bow River.  “This place was nothing compared to this; it’ll look beautiful once it’s finished.”

The campus is now complete and there are several markers on the property acknowledging the agency’s remarkable past and a time when the orphanage was ‘family’ to so many lost children.

The orphanage no longer exists but some things never change. Wood’s Homes to this day represents family for many of the young people who come here for help.

Wood’s Homes is grateful for the donations received in Hilda’s name. Click here to donate.