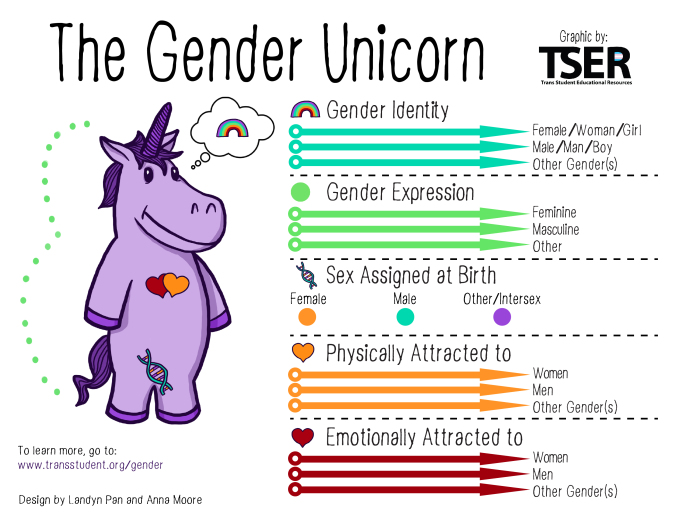 Sex! Now that I have your attention, let’s talk about sexuality and gender! Traditionally gender and sexuality were defined rigidly, using binary terms – male or female; heterosexual or homosexual. This was highly influenced by the systems that build social and cultural customs – religion, cultural practices, media, government, and so forth.

Today, we know that there are more than two genders, and sexuality is about what we find physically attractive and who we are emotionally connected to. We also know that binary terms can influence how we normalize one identity and not another. Unfortunately, this becomes the root of why some see transgender and LGBTQ identities as wrong/abnormal.

The Gender Unicorn is a popular tool to illustrate gender. It depicts gender identity as fluid, based on how one thinks of their gender identity. Someone’s sex is assigned at birth and based on biological body parts. However, it is very important to remember that body parts don’t define one’s gender. People can express masculinity and femininity interchangeably, regardless of what sex was assigned to them at birth and what gender they identify with. Transgender people are most often defined as someone assigned a sex at birth (boy) and later in life transitions to the other (girl). Some choose to use medical and physical options to transition, while others remain unchanged. Some will use male or female pronouns, while others will use neutral pronouns. Instead of assuming which pronoun someone uses, you can always ask. After all, everyone expresses masculinity and femininity interchangeably.

Heterosexual – someone who identifies as either man or woman and is physically and emotionally attracted to the opposite gender.

Homosexual – a traditional definition to describe someone who identifies as man or woman and is physically and emotionally attracted to the same gender. This can be a derogatory term for many individuals as it was first used to define a mental illness. Instead of using this term, ask someone how they identify their sexuality or use “diverse sexuality” or “LGBTQ”.

LGBTQ – is a short acronym for lesbian gay bisexual transgender and queer. The long version is LGBTQIA2SP and includes intersex, asexual, 2spirited and pansexual.

Normalize – is another way to express cis-normative or hetero-normative. Cis refers to “same” and describes someone who was assigned either boy or girl at birth, and adheres to either masculine or feminine gender expression. Normative is used to emphasize how gender and sexual diverse identities are a minority, and therefore experience oppression.

Transition – means change. No two people will have the same transition story. Some people choose medical options such as hormone replacement therapy and surgeries to assist in physical transition. Others don’t, but will find other ways to physically express their genders.

Pronouns – are common terms used to describe someone and consist of he/him/his, she/her/hers, and neutral options of they/them/theirs. More neutral options also include ze/zir/zirs.